The motto "The Biggest Little Fair in Wisconsin" got its start back in 1856 with the first steps in the formation of an Agricultural Society, with the first fair being held in Stockbridge, then moving to other cities and villages over the next several years, including Stockbridge, Brothertown, New Holstein and Lodi (now named Gravesville). 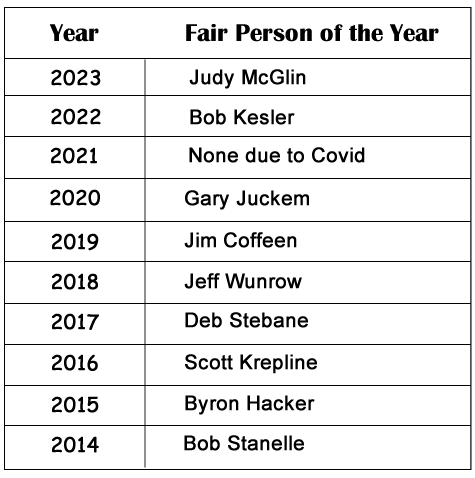 In 1888, Harrison Hobart deeded the land known as Hobart Park to the City of Chilton with the stipulation that the property was to be used for a city park, public pleasure grounds, public fairgrounds and public race course. It was not until after 1888 that the fair had a permanent location. In 1891 the association purchased 8.5 acres from General Hobart adjacent to Hobart Park, in 1898 another parcel of 4.5 acres was purchased from Theador Kersten; in 1926 land was purchased from a German shooting club; this gave the fair all the land from the Manitowoc River to Frances Street; in 1955 another 100 feet was added on the south end which was purchased from Joseph Sell. In 1993 the association added another 40 acres from John Bittner, bringing the total land owned by the association to 56 acres.

On June 15, 1878 a constitution was adopted and registered with the state under the name of Calumet County Trotting Park and Fair Association and with this charter the association was eligible for their first state aid of $100.00. In March, 1891, the official name was changed to the Calumet County Agricultural Association. As the laws have changed, it became necessary to re-codify the Articles and By-Laws, the last time in 1998. It's purpose today is the same as in 1891:The education of agriculture, mechanical, and household arts. To further enhance the needed educational programs for the benefit of the people of Calumet County. To conduct such exhibitions, fairs, and events consistent with the educational interests and needs of people in Calumet County and the members of this Association.

Highlighting some of the milestones from history shows that in 1863 was the first horsemanship and trotting classes were listed for premiums; in 1883 there were a total of 428 entries; in 1891 the one-mile race track was built for $1,100.00 with the single largest item being engineering for a total of $691.00. It was completed for the fair dates of September 29, 30, and October 1, 2, with 40 horses entered for the races; in 1901 the Milwaukee Daily Journal brought 200 homing pigeons to the grounds and released them from time to time with messages on fair activities; in 1904 fire destroyed all the fair records; in 1905 for the first time, the County Board appropriated money to assist the fair in the amount of $400.00.

Around the year 1909 people could ride a stern-wheeler from the State Street Bridge to the fairgrounds. In 1911 the first grandstand entertainment other than racing was held at a price of $200.00; in 1914 the first auto and cycle races were held; there was a contract with Calumet Service Company to run electrical wiring to the fairgrounds at a cost of $100.00; in 1917 the first Extension Agent was Royal Klofanda; in 1919 the first Club Agent was E. W. Shellings; in 1924 A. T. Hipke was elected president and the County Board appropriated $2,000.00 for running the fair; in 1924 membership was taken in the Wisconsin Association of Fairs; in 1928 the County Board gave $5,798.00 toward a new grandstand; in 1935 airplane rides were offered as an attraction; in 1936 the first Calumet County ribbons were printed with the county seal; in 1936 the City of Chilton showed interest in developing Hobart Park; in 1937 a quarter-mile race track was constructed with WPA labor for stock car races which were held in the 1940's and 1950's; 1943 saw Orrin Meyer become County Agent; 1944 the fairgrounds became a war labor camp with prisoners being used by farmers and canneries due to the labor shortage from the war; in 1955 the polio epidemic canceled the fair; 1966 gate admissions were 75 cents daily and a $2.00 season pass; 1973 saw the first Fairest of the Fair contest being held; in 1974 the first female board member was elected, in 1988 stock car races returned to the fairgrounds.

Calumet County Fair has been honored to have 3 state Fairest of the Fairs and one Alice in Dairyland.

The oldest building on the grounds is the Exposition Building built in 1891. In 1919 the present horse barn was built. The Merchants Building was built in 1922. The present Grandstand was built in 1928. After World War II, interest in exhibits rose dramatically and several tents had to be erected every year for the fair, then in 1958 the Arena was built which housed the cattle. In 1964 the Moehrke Building was built, and in 1969 the Seybold Building was erected, both are cattle barns. With the collapse of the old hog and sheep barn, a new building, the Harder-Goeldi Building was constructed in 1981, which now houses an indoor show arena and swine and sheep. In 1977 the Stanelle Building was erected due to the increase in merchants exhibiting at the fair. With the increase in 4-H exhibits, in 1987 the Brantmeier Building was built. The most recent addition is the Farm Progress Pavilion, built in 1997, which replaces the old beer tent and which can be utilized by Calumet County residents and groups for their outdoor summer festivals and events. 1999 will see the construction of a new horse barn for the area by the horse arena on the south end of the grounds.

The Calumet County Fair is owned and operated exclusively by the association, a privately held organization chartered under Sec. 501(3)(c) of the Internal Revenue Code as a tax exempt organization. The organization is comprised of approximately 350 stockholders, a stock-holder elected board of 21 directors, and an executive board of directors. The Calumet County Fair could not exist if it were not for the countless men and women volunteers who have given freely of their time and talents, who are devoted to the principles set by their forefathers and for the generations to come.